Another $100 Room Challenge is on the books… this past month I worked on a kids bathroom makeover. 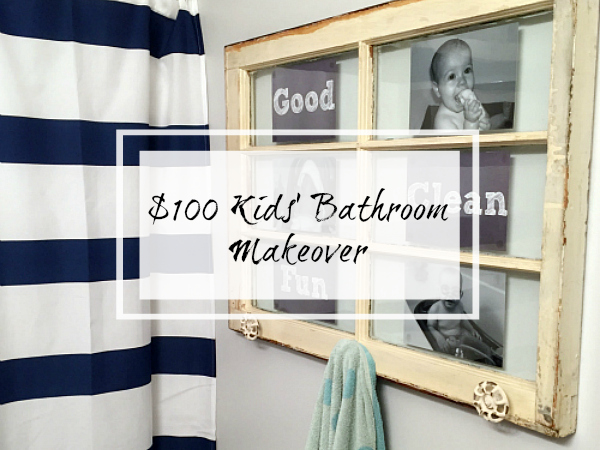 Hello everyone! It’s the last Wednesday of December and that means it’s the final $100 Room Challenge reveal of 2015! I have certainly taken this down to the wire. We have been enjoying so much Christmas, balanced with some viral crud, so the kids’ bathroom wasn’t touched much this past week. Today, however, I cranked it out to get it done. Are you ready for the reveal?

I always like to start with a before picture so you can see just how far the room has come over the past few weeks. Lots of monkeys and frogs coupled with seafoam greenish paint.

Back in week one, I listed my goals for the space, so let’s see how we did…

Done… you can see that change here in week 2.

I did, indeed, replace the shower curtain, which you will see a bit later. As for the soap dispenser, I was thinking of doing a mason jar soap dispenser, but the thought of glass on the sink with a five year old made me too nervous, so I just went with some hand soap and called it good. The toothbrush holder, however, is done… made of mason jars, which I love. This was actually a 10 minute project. I was able to clear a lot of the clutter from the counter with the DIY toothbrush holder. Under the sink was a simple task of just putting some things away. You may remember from the first week’s pictures that there were only two hooks for hanging towels on the back of the door, so last week I revealed my solution… this old wood window became my new towel rack. The above towel rack is my “artwork”. Cute pictures of kids in the tub… does it get any better?

This was a last minute idea that came together beautifully. You know those popcorn tins you get for Christmas? I kept saving them knowing one day they would come in handy. Today’s the day. I bought some navy spray paint and sprayed down the popcorn tin… Now I’ve got a navy wastebasket! I decided to add the word “TRASH”, but did so with a chalk pen, as I’m not sure whether I like it better plain or with the lettering. I can always wipe it off if I decide to go plain… *Update: I decided I liked it better plain.

This wasn’t a priority (thankfully) because that cream rug is still in the bathroom being used.

I knew from the beginning this was wishful thinking, and wishful it was. After week two’s budget there was no way I was going to have enough to paint these, so they remain the same.

Here’s the bathroom in its full reveal. 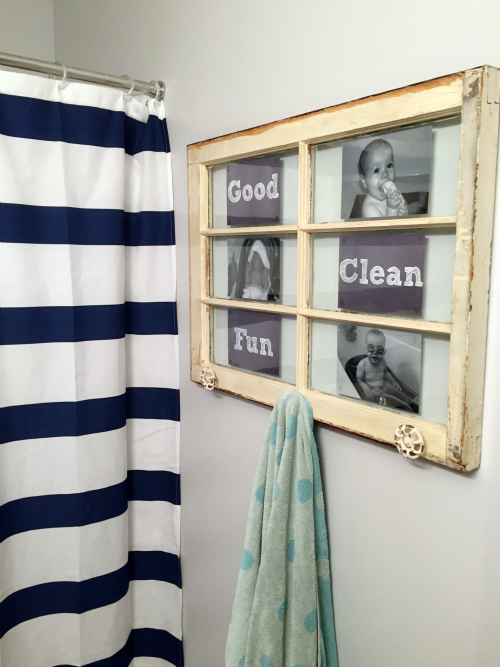 If you recall from last week, I had spent $92.94 of my $100 budget. I only made one additional purchase this week. 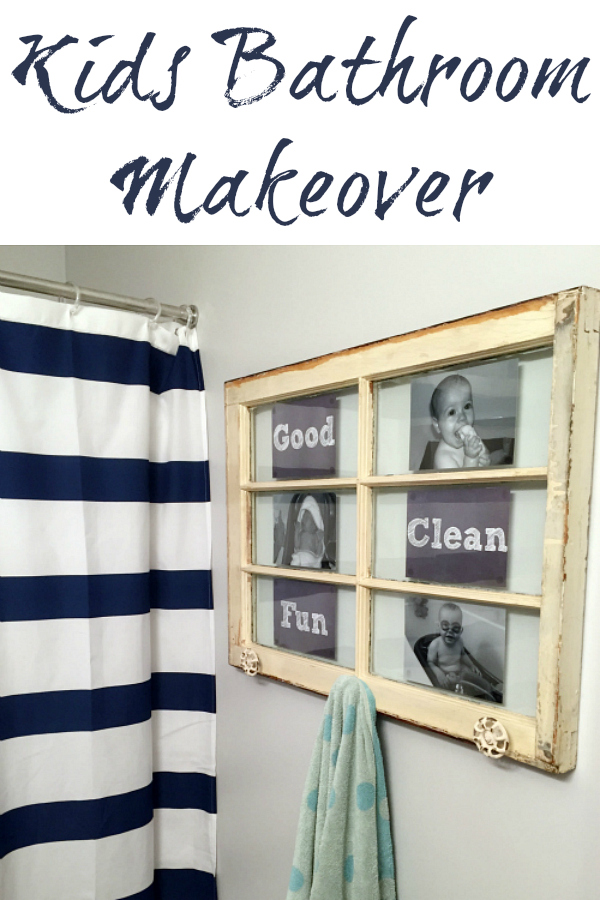